Alcohol or Cannabis - Which Drug impacts your body the most?

roger-ramjet in WeedCash Network • 2 months ago 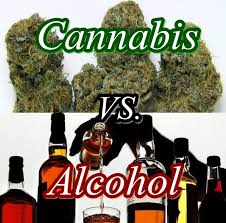 Which is really worse for your health?

Alcohol and Cannabis.... 2 very socially accepted drugs that can have large health effects on the human body. Lets take a look at how these 2 drugs might impact the body:

Drinking too much alcohol can kill a human. The inability for the liver to process alcohol quickly, can result in a build up of alcohol in the brain, resulting in vital organs shutting down and ultimately death.

Marijuana affects the cardio vascular system and heart rate but you cannot overdose on Cannabis like you can with alcohol.

Both drugs have different short term effects on the bodies reaction times and the ability to make rational decisions, depending on how much of each drug has been consumed. Unlike alcohol, the effects of chronic marijuana use are not as well established and researched. There is evidence marijuana can worsen psychiatric issues for people who are predisposed to them, or bring them on at a younger age. Because the drug is typically smoked, chronic cannabis use can also have a long-term effect on the respiratory system.

The most concerning long-term effect of chronic marijuana use is with young people who use the drug, because the drug interferes with the development of the brain while it is still maturing.

So which is worse for society as a whole? The impact of alcohol is much greater across the globe, but this is most likely due to the fact that it is more widely available. More is known about the effects of alcohol on the human body than cannabis and as more states and country legalise cannabis, more research and information on its health effects will become known.

There is evidence to also support the health benefits of both drugs, with the medicinal properties of marijuana well known for the treatment of some ailments and diseases.

Alcohol is by far worse, but that still don’t mean cannabis is a walk in the park. Some people with mental illness should stay far away from the herb, just as much as they should stay away from booze. Also the smoking aspect can also cause problems, but no where near tobacco.

Congratulations @roger-ramjet! You have completed the following achievement on the Hive blockchain and have been rewarded with new badge(s) :