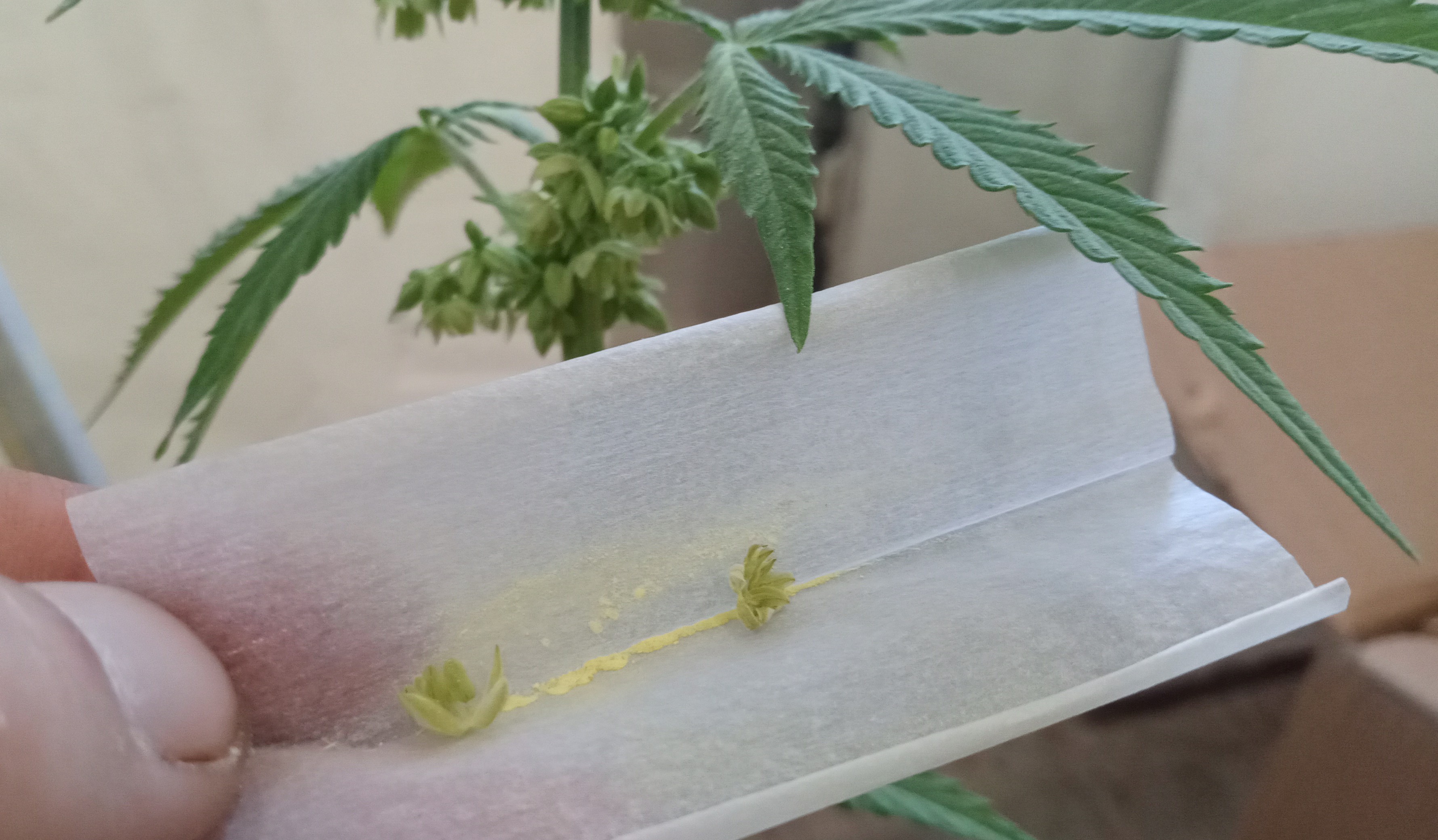 Two and a half months ago, March 31st, I started germinating Northern Lights and Raspberry Diesel cannabis seeds. Two months ago, I had three Northern Lights and one Raspberry Diesel seedlings sorted out for the grow season. May 22nd they were brought outside to harden for the transplanting - two plants started showing to be male, eventually discarded, the larger one had it's pollen harvested and saved for later cross breeding. The females were transplanted June 8th, along with two additional Northern Lights females to take the place of the two males. I'm not sure if the week in the cold basement, root binding, or other stress put them into the flowering stage, but a few days after being outside for hardening, two of the Northern Lights plants started showing male - balls, pollen sacks, flowers. Hopefully the remaining Raspberry Diesel and Northern Lights plants are female and not just slower to show male.

I destroyed the smaller male plant, the larger male plant I snipped at the bottom of the stem, removed the bottom half of leaves, and placed in a large bottle of water to keep it hydrated. I brought the bouquet up to the house and left it in a non drafty corner, and waited a couple weeks for most of the flowers to open. 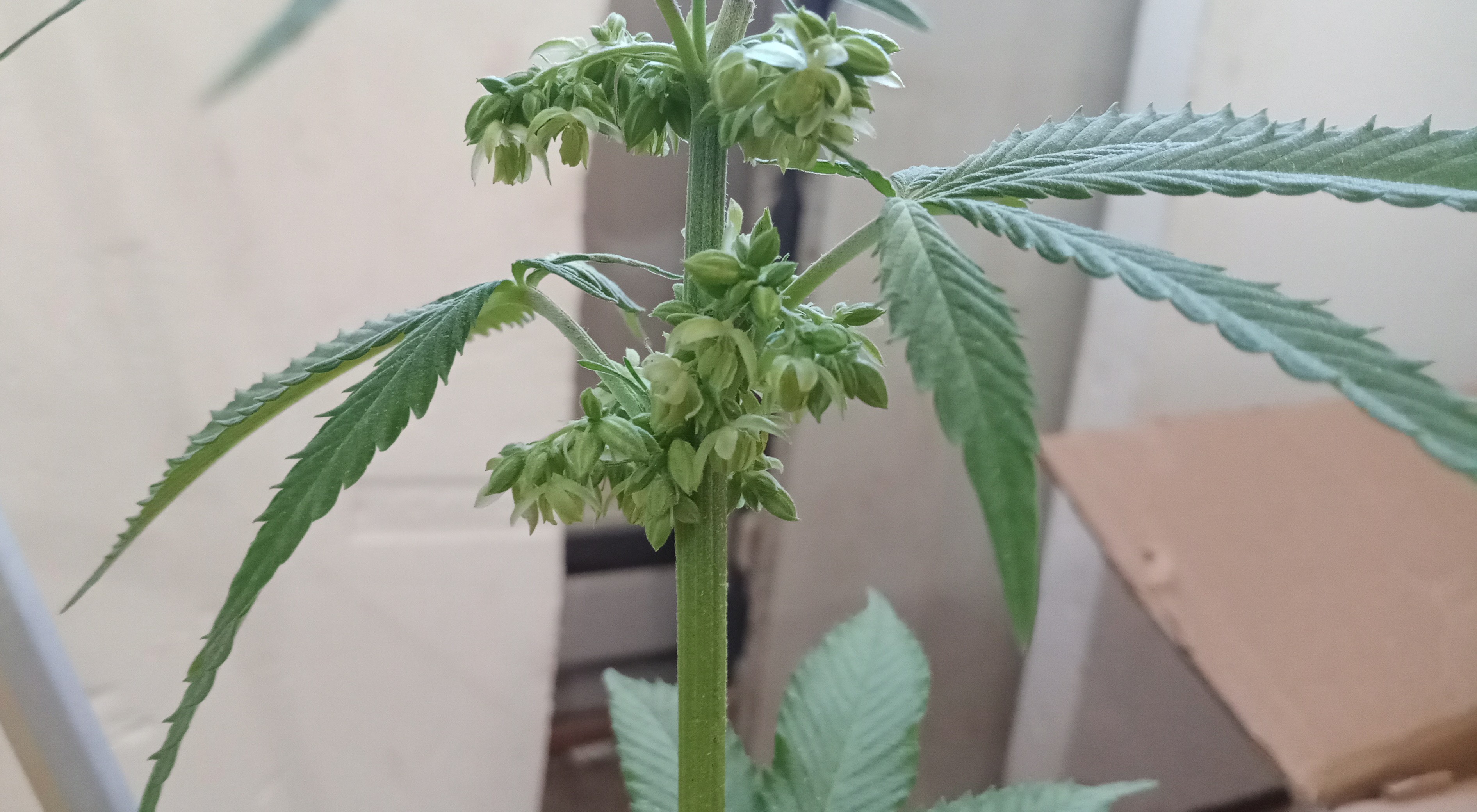 I placed a rolling paper under the flowers, then gently tapped the blooms - golden amber pollen rained down on the paper. I carefully folded the paper, put it in a zip lock bag, placed the bag in a plastic screw on lid container. I placed the container in the fridge for 24 hours, and then I moved it into the freezer until it is needed for pollinating. I'm guessing the pollen should be viable for a couple years, I'll be using some of it on the Raspberry Diesel plant to produce Raspberry Diesel x Northern Lights seeds. When it is needed, I'll move the pollen from the freezer to the fridge for 24 hours to let it slowly thaw. 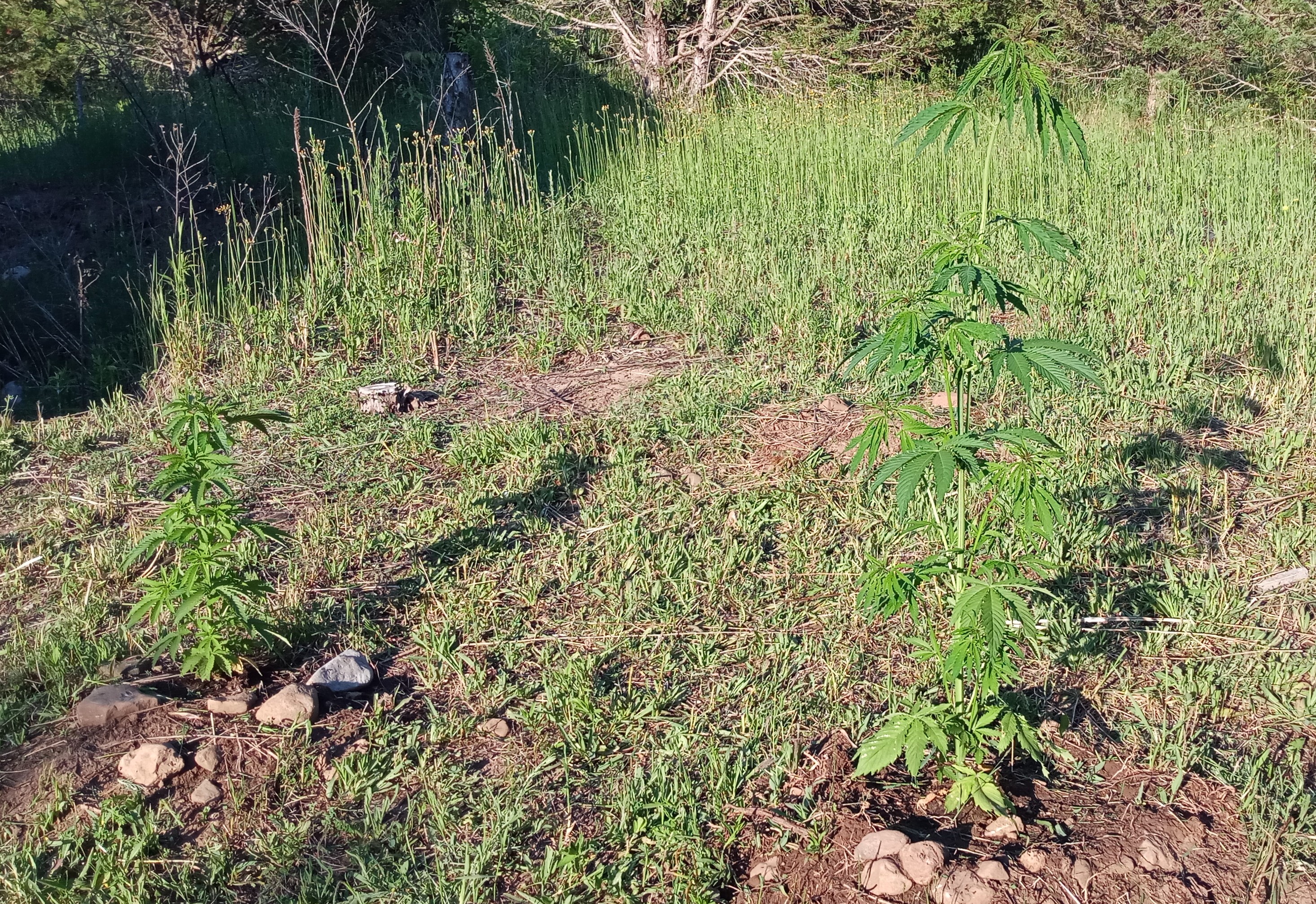 This Raspberry Diesel plant has been a beast from the start - with large and odd shaped initial fan leaves that reminded me of raspberry leaves. This tall 65/35 sativa hybrid is showing it's genetics - almost double the height of the Northern Lights plant, with large branches shooting out from all sides, impressive. The plan is to cross pollinate one of the branches with the pure indica Northern Lights pollen - for a batch of hybrid seeds.

I'm looking forward to these laid back and stress relieving pure indica Northern Lights buds. A few days after transplanting, the top of the plant had some of that foam with bubbles on it from an insect - I panic'd and topped the plant. I later found out that it was easy enough to wash that foam off with water, simple. It has two tops now, I'm looking forward to lots of growth before it goes into the flowering stage.

Check out the branches on the Raspberry Diesel, that's nice, this grow spot gets full sun, it's good to see the plants filling out. Those bottom branches are just right for making clones. The Northern Lights plant in the front is branching out well too. 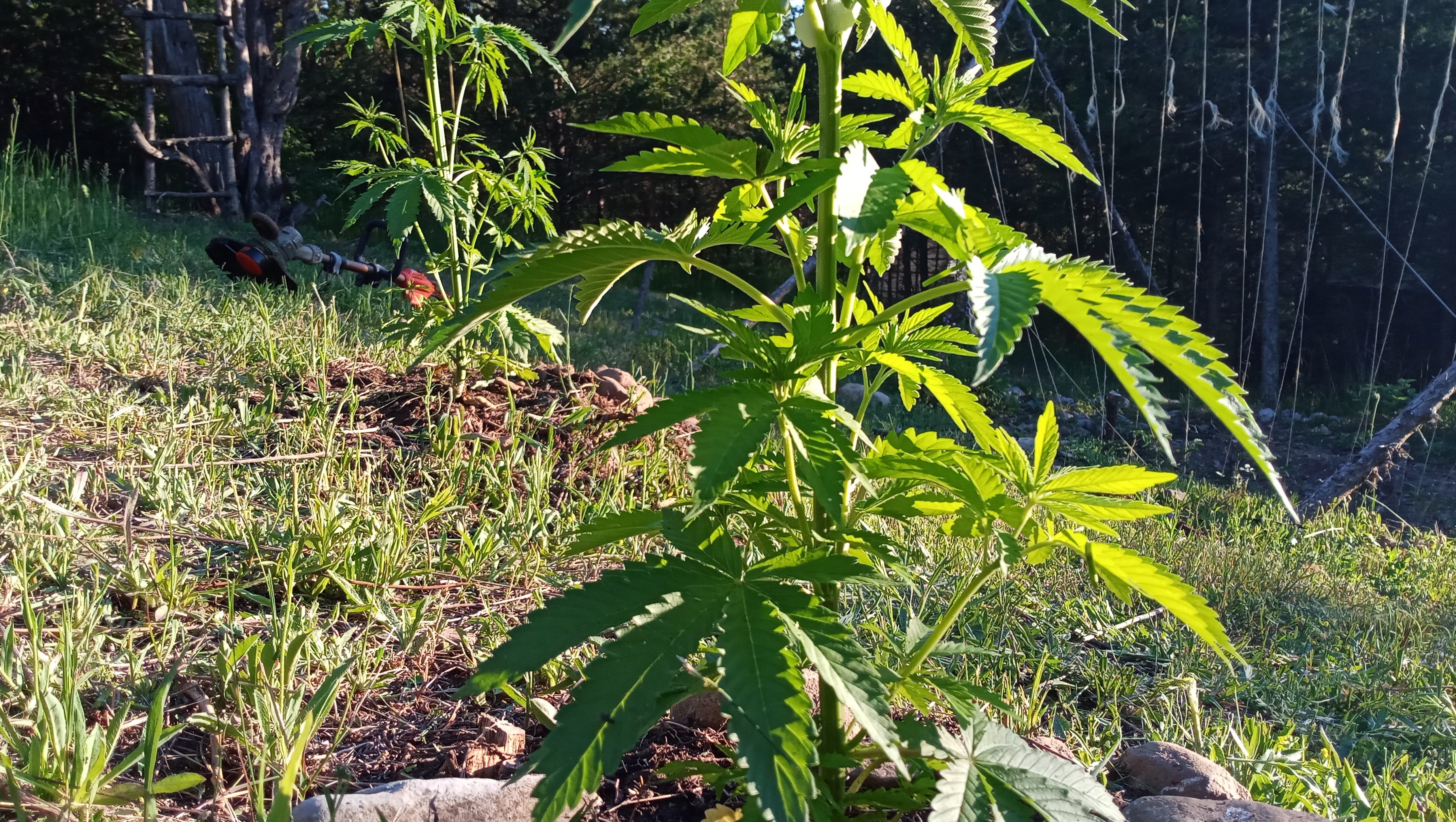 Raspberry Diesel in the back, Northern Lights in the front

With the two male Northern Lights plants not being capable of producing buds or THC, that left room for two more plants for this outdoor growing season. I had previously given two smaller Northern Lights plants to buddy, but he ended up not needing them, so I brought those two back in time for transplanting.

Smaller plants, I'm hoping they have a boost in growth before they go into flower - they haven't even started branching out.

These two were in one container, I didn't feel like separating them at the roots, they are a little too close together for full sunshine exposure. With a couple stakes in the ground and some short pieces of twine, I gently bent each plant over, away from each other. You can see below, after 24 hours the tops of the plants have already turned upwards toward the sun. Tomorrow I'll move the string to where the top has bent up and pull the plant top down a little more. The tops will rise again, and with the additional sunlight exposure to the leaf nodes the branches will also grow upwards - with plenty of sunlight to produce decent size buds on them.

June 15th - After a day of training

I'm still debating it, but there's a good chance I'll scrap one of the little Northern Lights plants and take a lower branch clone from the beastly Raspberry Diesel. The Raspberry Diesel clone I'd grow indoors as a mother for a few clones for the next season - I'm impressed with this Raspberry Diesel plant's growth, I'm looking forward to these plants growing larger and budding.

Have a great day!

The colors that both these plants have are just phenomenal.. I can't wait to see the buds either 🤤

That is some powered gold! So many males get discarded, it’s almost concerning, good for you for taking advantage! That is key for successful seed stock

For sure, it'll be great to have some N.L. pollen on hand, I'm going to save half for next season - technically the males are just hemp, I assume no THC.

Amazing grow..... anxious to see when the buds are there already.