drutter in WeedCash Network • 3 months ago

Until now I've never seen a cannabis plant divide into identical halves on its own. Bifurcation is a natural process that splits or forks something into two branches, and can be seen in both plants and animals. I've split cannabis stems into two before, by topping them (removing the actively-growing tip), but this is different. I just noticed one of my 9-week-old indoor Reclining Buddha plants has bifurcated completely by itself, and I'd like to share it with the blockchain! 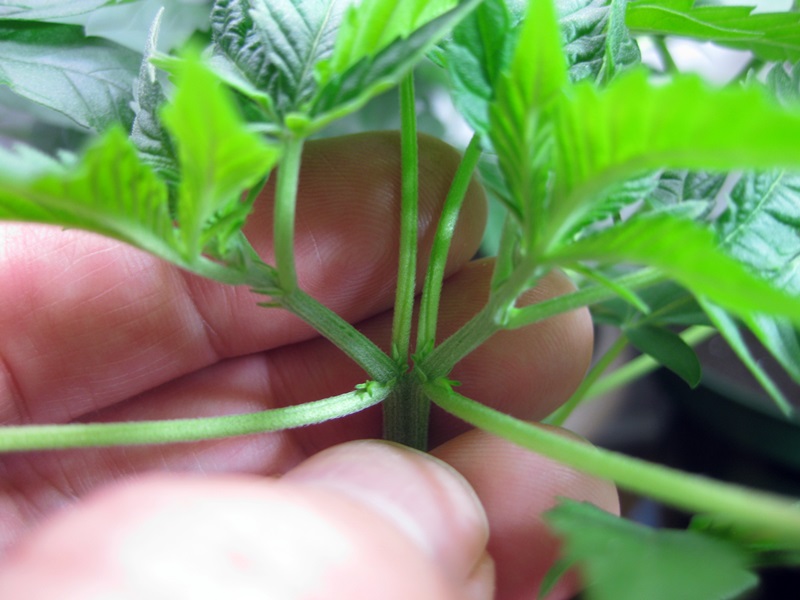 The split seems to have happened at a node, resulting in 2 identical stems, and 2 identical sets of leaves! Each of the new tops is fully-formed and healthy. 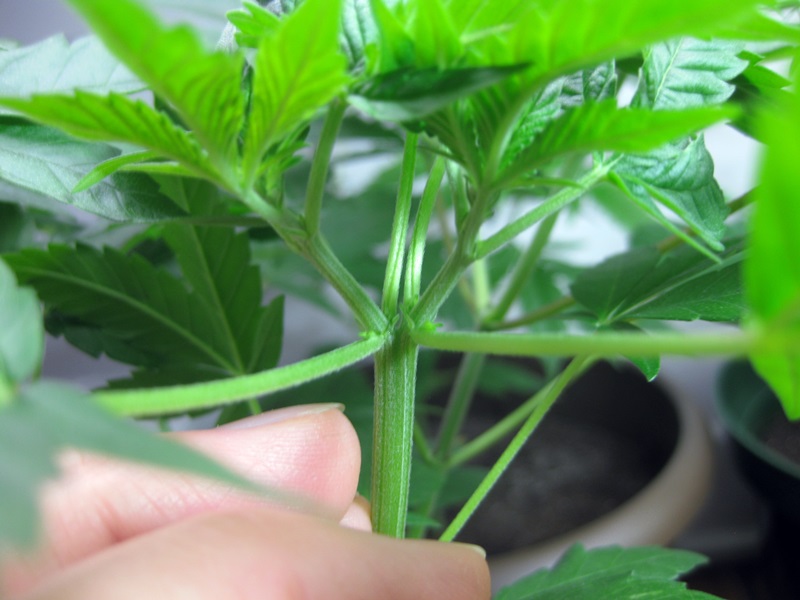 Normally, this is what a topped stem looks like after regrowing for a while: 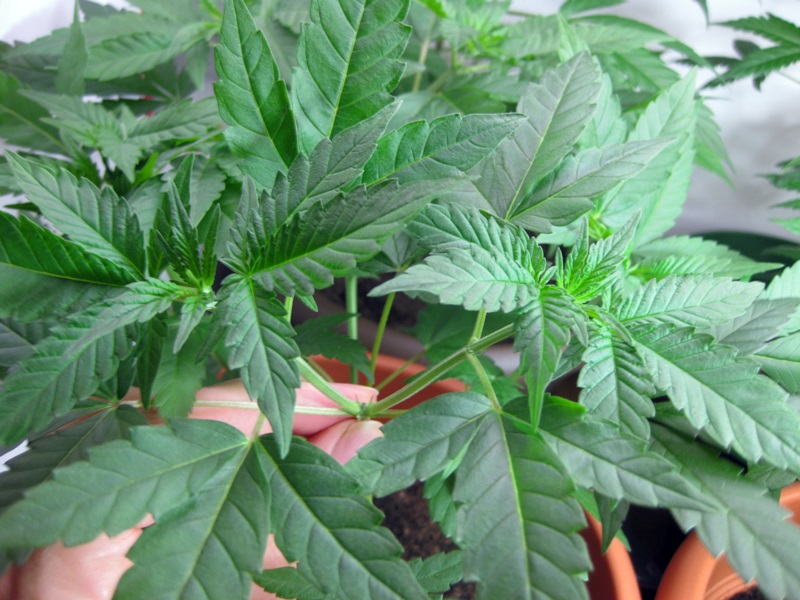 Also from another part of the same plant, here's what a regular single stem looks like from above: Now the self-split stem, from above: 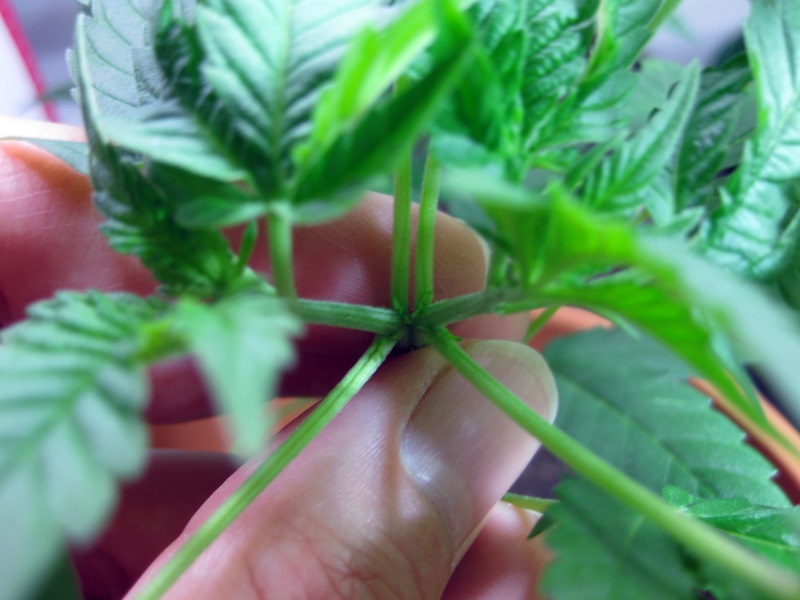 That's pretty bushy, which is how I spotted the anomaly in the first place. "What's this really lush and overgrown section?..." 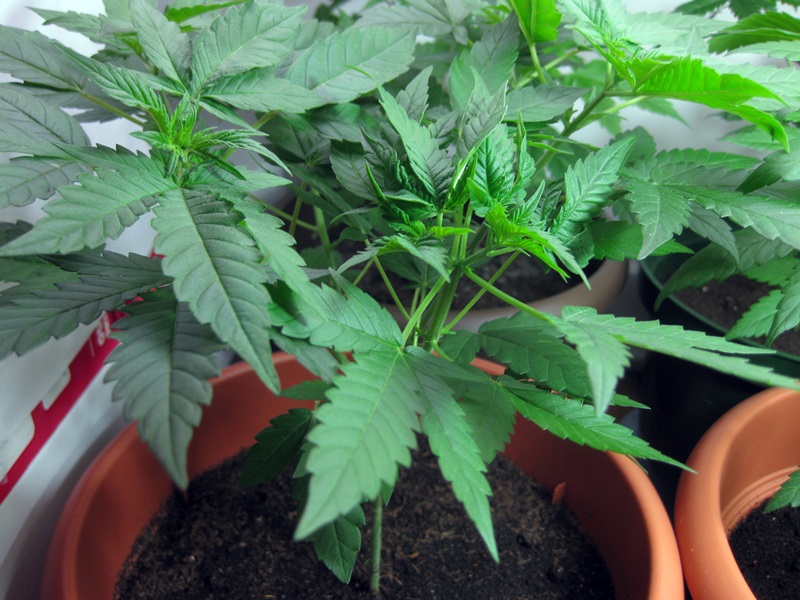 The plant itself is doing very well, along with the other 6 reclining buddhas in my small garden. Here's a schematic of the plant structure, with the self-bifurcated section circled: 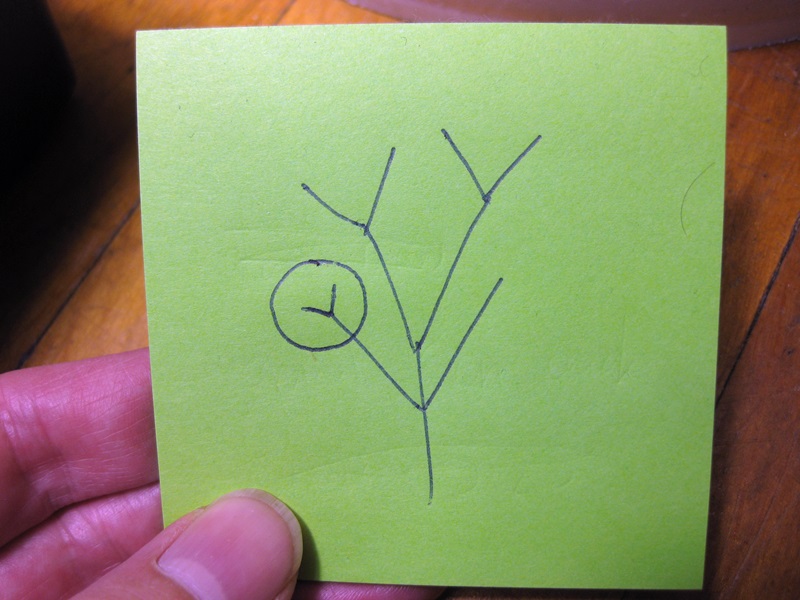 I don't know. Like I said, I've never seen it in cannabis plants before.

One thing I notice is the plants (especially this one) are very happy lately. I think they're loving the warm weather we're having here in BC. Even though I'm indoors and the temperature is fairly controlled, they feel it's warmer than normal, they sense all the extra sunlight spilling into the room from outside. They know it's Midsummer, and they're in heavy vegetative mode right now!

But that doesn't explain why this stem decided to basically clone itself.

The plant seems no worse for wear (although I wonder if the increased density might increase the chances of mold later on).

Have you seen this before? If so, did you remove one of the tops, or just let the plant double up?

What am I feeding it?

Could a surge in nutrients, or an interaction with a product I'm using, be responsible?

No, because I'm not feeding it anything, and I'm not using any products. This plant is 200% organic! It has had nothing (and I mean nothing) but plain water since it was a seed 67 days ago.

So what's in the dirt? It's half dry moss (inert filler), and half worm castings (earthworm poop). In other words, it's dirt. So I have no idea why this otherwise normal and healthy plant decided to split this branch in half and form an ultra-dense canopy. And no explanation for why it's just on one side of the plant - the other side branch is totally normal.

And I haven't decided what I'm going to do with it, either. I'm trying to grow medicine here, and don't need any freak anomalies interfering with my flow! But then again, I'm a big believer in the "life will find a way" philosophy, and this unexpected bifurcation might prove to be adaptive, rather than a source of problems. Maybe I should wait and see?

Either way, I hope you enjoyed the photographs of this uncommon phenomenon. Yeah @Medikatie, this is something I've never seen before.
Let's see if any veteran growers comment here. I'm interested to find out how common this mutation is!

Hey bro, the canopy is amazingly lush, some of the healthiest cannabis foliage I have ever seen.

What caused this?
I don't know. Like I said, I've never seen it in cannabis plants before.

I don't know either, it looks similar to how two new stems will emerge from a new node that's been clipped, but since you didn't perform any surgery on the plants, and it's a natural occurrence, it's a bit perplexing.

I have a guess, and it's only that. I think the plants are so healthy and growing so fast, that it had to burst out with new foliage because the photosynthesis is just on fire, and probably the soil is amazing too.

Thanks for sharing, I hope my plants burst out new leaf nodes like that :D

Yes, that is an amazingly lush and beautiful canopy, no doubt! :)

Your theory could be right. Things sure are lush right now.
Happy solstice :) Good to have you back on the blockchain.

Keep that plant safe and breed those seeds if it produces any so you can try to recreate this situation. You got yourself there a special specimen.

Thanks, I will see about preserving the genetics.
If nothing else, I've got more seeds from where this plant came from (siblings). Unless it's a freak mutation from nowhere, the genes came the parents, so they'll also be in some of the other siblings.

So far, it looks like nobody has any explanation for this, and nobody has seen it before! Very cool! ReHived to my cannatastic people... maybe one of them knows something about this?!

Who knows what caused that...

If you do not feed it fertilizer, you rely on the life in your potting mix to provide the nutrients. That life is going through its own cicles and stuff and even though it's all natural and organic and all, there might not be the right nutrients available at the right time, especially if the pot is small - just sayin ...

Organic processes in the soil might cause nutrient spikes or shortages that are totally out of your control.

Do you know about mykorrhiza?

I know a fair bit about it, yes. Is there a particular aspect of mycorrhizal fungi and their relationship with plant nutrition I should understand?

I was just wondering where those should come from and what they would feed on in worm castings and moss :P

In general, I have a feeling that a pot is not big enough to kick off and maintain all processes that would be ideal for a plant.

But if you know a fair bit you are probably ahead of me, anyways :)

Some people buy fungi to add to soil directly, but all dirt has some in it, and it spreads well in most conditions. With some moisture it can grow in most soils, and forms a relationship with plant roots, helping each other absorb and move nutrients. Sometimes I add a little soil from my previous plants to my new pots, to ensure some live bacteria and fungi for the new plants.

You are right, I will have to worry about depleted nutrients toward the end of the plants lives. Thank you for the warning!

Only by topping, I have seen like this. What is the temperature
you maintain??

Wish I could tell you! I don't really consider temperature. Room temperature here varies between 20C and 25C depending on time of day and time of year. It has been pretty warm lately and I think they're enjoying it.