drutter in WeedCash Network • 3 months ago

What can you do with extracts (like shatter, budder, wax, or oil) you don't want to dab, vape, or smoke? Make edibles! Infused shortbread, in this case. Let's get baked together as we make these cookies, take some photos, and post the recipe. (A quick toke of something nice get things started, and then we're off!) 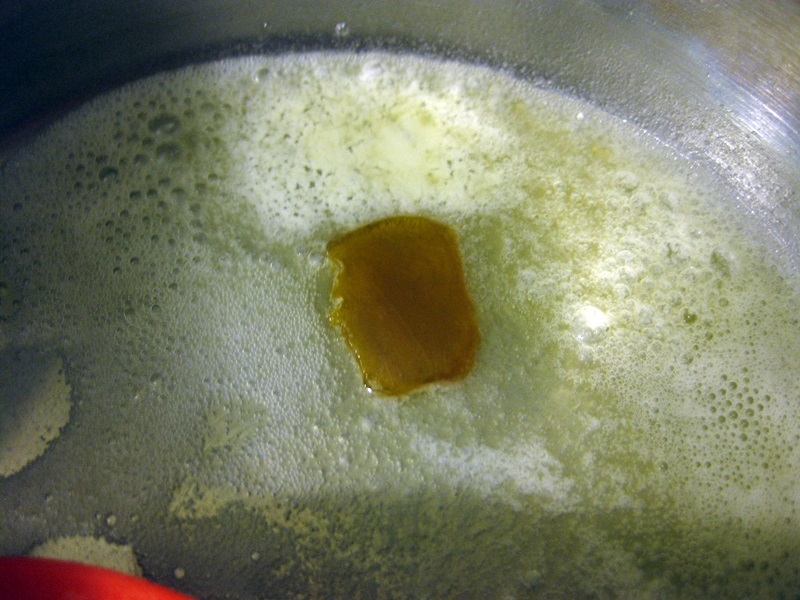 First, get half a cup of margarine or oil in a saucepan on low. Drop in your extracts. You can use anything, even hash, but keep in mind the flavour will come through, so if you don't like edibles that taste like weed, stick to shatter or distillate. I'm using a chunk of "Pineapple Express" shatter that makes me cough. I have plenty of better stuff for the dab rig, so this is perfect for edibles. Whoa, the smell coming off the melted margarine in the last step was intense. I think I got ripped, woops! 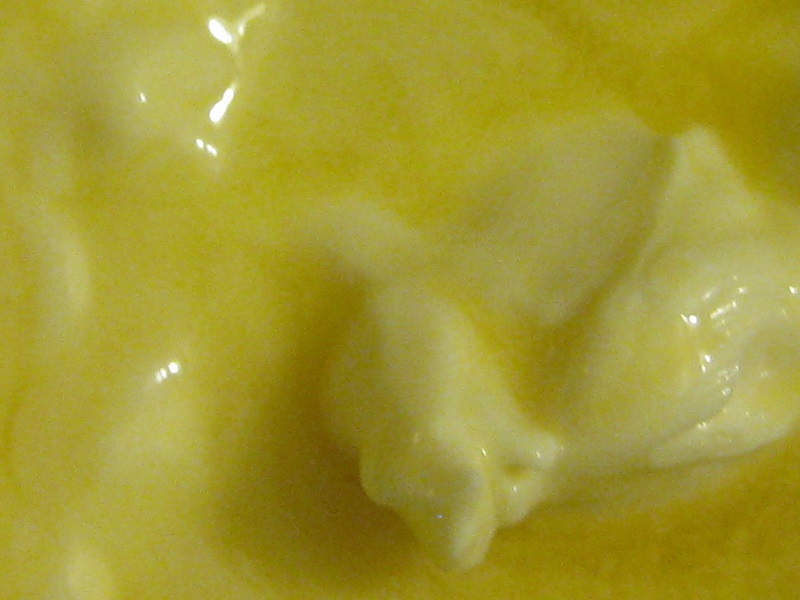 So now we've got what a lot of people all "canna-butter", or just infused oil. Mine has 1.5 grams of cannabinoids, well, I just realized it was more like 2.5 grams, damn. Oh well, @MediKatie will probably like it this way. I scooped in 1/4 cup icing/confectioner/powdered sugar, 1/3 cup Bob's Red Mill 1:1 gluten-free flour, 1/3 cup almond flour, and 1/3 cup cornstarch. (If you like gluten, you can use regular white wheat flour instead of the Bob's.)

Optional, a pinch of salt and vanilla. It's not possible to pinch vanilla since it's usually a liquid, but to make the recipe shorter, I just said "pinch", because you know what I mean. But then I explained everything anyway, wasting more space and time than I should have, because holy damn, I'm baked!

I should have written up the recipe BEFORE trying out the cookies... hahaha!

I stirred and mixed and swirled. Man that was fun. Everything was really well combined, and it still smelled really chronic. I just about ate the batter! Hmmm, actually, I think I did eat a little of it, by accident. It was on my fingers. 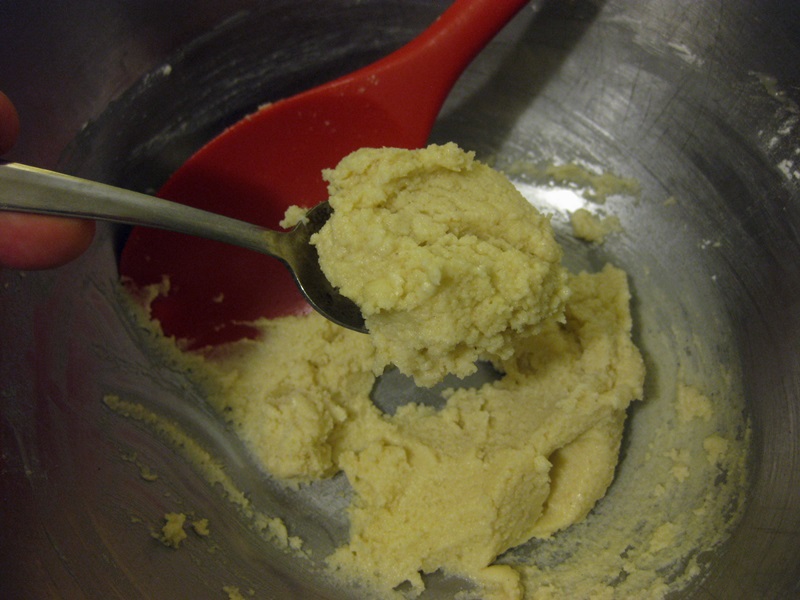 There's the batter being scooped up for the baking sheet. It's really an easy recipe. Less than 10 minutes total prep time. I didn't make it SOUND easy, but it is, trust me. One bowl, a few ingredients, and into the oven.

Speaking of oven, preheat to 325 or 350 F (some ovens are a little hotter than others). The batter should be pretty soft and mushy, that's actually perfect. Like toothpaste.

Spread it out into cookies about 1/2 inch thick on a baking sheet. I put parchment paper under mine.

15 minutes will do it! Turn the baking sheet around half way through.

My house smells really dank! Yours will too.

And remember, if you're under 12 years old, consult a trusted adult before using the oven. And you shouldn't be reading 18+ blogs, anyway! If you're old enough, great, this recipe may be for you.

When done, they will still be quite pale on top, and only light brown around the edges. Don't bake them until they're brown all over because they'll be so dry your mouth caves in. 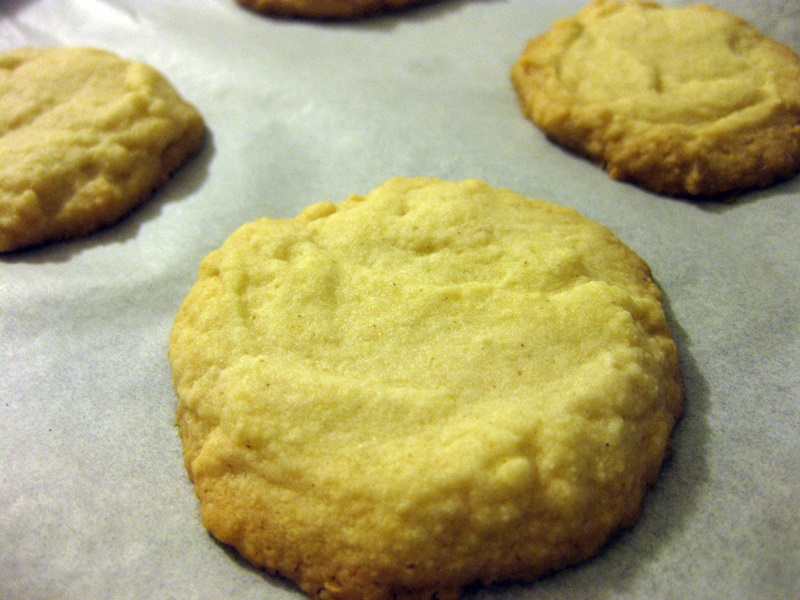 I calculated for 15 cookies, but it ended up only making 10. And there's 2.5g in there instead of 1.5g, so they're at least twice as strong as they're supposed to be...

The good news: They're really good! I ate 2 before I remembered they're infused, yum.

Well, I feel like it was a great success, despite the miscalculation. When you try this recipe, I'm sure you won't make that "mistake" ;) @hempy, you've been given LUV from @networkallstar.

You can be more precise with the dosage and the taste is always better.

Good call on the improved dosing and flavour! Quite true.
There's only 2 left now... quick stop by for a cookie and beer :P

When your dabs are so bad they make lung cheese that looks like the stuff in the thumbnail...it's time to make edibles! Nice cannargerine, love the swirls ;)

Yeah, the pineapple express made me want to barf I coughed so bad. These edibles on the other hand don't make me want to toss my cookies ;)

Those were dankalicious cookies. Good thing we finally god some shortbread cookies figured out last year so we can make some totally necessary upgrades! Those we're extremely quick compared to the hashbrowns, haha, but then again we made tons of hash browns. LOL at the cookie math. They're really nice and dank, they'll make fantastic Christmas cheer this year. You've been curated by @theherbalhive on behalf of The Herbal Hive.We support any content related to herbalism, from stories about your relationship with medicinal plants, to wildcrafting, foraging, ethnobotany, plant spirituality & herbs as nourishment, as well as the use of natural products to create medicines such as salves and tinctures. Use the tag #theherbalhive or post from our community!
Community II Delegate II Curation TrailII Discord