mineopoly in Proof of Brain • 5 days ago (edited)

After reading an article from @diebitch I learned that nothing can be more perfect than perfect. She said she had roasted herself on video but she won't show it to us until she dies.

A strange thing happened last night and her roast video leaked during the digital glitch. Now I have a part of it here. In this clip she is commenting on her own outrageous POB-WOTW post.

Even this gif can be made into an NFT and then sold for an outrageous price.

What are outrageous NFTs?

If you are not sure what NFTs are then take a lesson from Pete Davidson on SNL. That's where my kids learned it from and now they are NFT experts.

Flying Falcon bought this digital plot of land for 888.25 Ether about $1.5M at the time it was sold.

Flying Falcon reported to Coindesk that he bought the land for his thesis: “What we’re witnessing is a historic moment; the rise of digital nations with their own system of clearly delineated, irrevocable property rights.”

His virtual picnic spot cost more than my actual house. This is the algorithmically generated pixel art image of an ape. The ape picture went for 800 Ether in the end of February which was more than 1.5 million dollars.

That's a lot of monkey.

This tweet was posted by the founder and CEO of Twitter Jack Dorsey.
It sold for 2.9 million USD.

What kind of outrageous person would offer that much money for one tweet? This is a ten second clip of 3D dystopian art.
It sold for $6.6 million.

"Nobody has better respect for intelligence than Donald Trump."

These are algorithm generated pixel art images. The alien #3100 (blue and white head band) and #7800 (the one smoking the pipe) sold for more than 7 million USD each. This little nymph was a collaboration of @Grimezsz & @MacBoucher1 and sold for 6 million USD.

But a percentage of the sale was donated to @carbon_180 a climate-focused NGO working to build a world that removes more carbon than it emits. I guess that would make this one a clean sale. Did you notice anything unusual about this picture of Grimes with her boyfriend?

Grimes and Musk - The Times

Crypto Cobain sold hashmasks for 16 million USD.
The creator of Hashmarks remains anonymous, probably because the creator is actually hundreds of people of Fiverr. They created more than 16,000 individual unique original digital artworks.

Most were made using an algorithm, and about 20% were made by hand. They are pretty cool. Some of them can be pieced together like a puzzle, but I'm not sure if they are worth 16 million USD.

Well, maybe these are worth it. Imagine going to school and saying,

If you are not into outrageous NFTs then try one of my reasonable NTs at https://nftshowroom.com

You can find @mineopoly for only 20 Hive.

(By the way, this is not financial advice neither did I intend to hurt your feelings today. I hope you can take this with a laugh and a smile.)

The world of NFTs is really something very insane. I can't understand how all this can make so much money (in such a short time).

It made a big impact on crypto but it was too big... therefore outrageous. It all happened too fast and influenced an economic ripple that is significant.

I know nothing about NFT, maybe just was some information. I have been trying to comprehend the tweet that was to be sold for $2.9 million, that's outrageous really and 888 ethereum having just that little value then

Maybe he would have been better off keeping the Ether, but Ether has its value today because of trades like this @dwixer. It's the NFT paradox.

Yeah, they do because of the trade like that, I agree with that.

The way the lady in the gif looks uncannily like me😁

I used my imagination :)

I had no idea the NFT market was so impressive. There are many works of art in the physical world that have questionable values... And now I see that NFTs are following the same path. I was really surprised and I think I'll try to create my own , will I get the same lucky? LOL

I think the best thing is to create a following. Making an NFT is an investment. I'm not going to make anymore but I'm going to continue to create by nature. Maybe later somebody else will want to NFT my work.

I didn't know about some of these NFTs. NFTs are like the hipster equivalent of owning rembrandts and picassos.
Really enjoyed this!

NFTs are like the hipster equivalent of owning rembrandts and picassos.

That's a really good way to explain it. The fascinating thing is putting crypto to use to buy and sell.
I still think the prices are outrageous for some of these.

Bargains, bargains...truth is stranger than fiction

You are the king of Hive NFTs @frot.

We used to collect these garbage pail kids when we were little. We expected the price to go up, but it barely kept with the price of inflation. 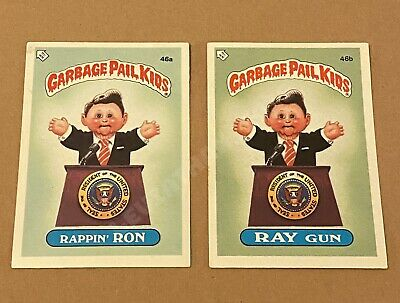 Your content has been voted as a part of Encouragement program. Keep up the good work!

Use Ecency daily to boost your growth on platform!

Thank you for the encouragement friend :)